An Islamic Fintech startup IMAN, closes USD$1million in seed funding to introduce a new financial product that is Shariah-compliant in Muslim markets. The new platform uses technology to democratize access to finance in line with the region’s religious views and faith.

Founded by Rustam Rahmatov and Mark Zubov, IMAN introduces a tailored mobile platform for Muslim majority markets consisting of IMAN Invest, an investment platform, and IMAN Pay, a halal BNPL (buy-now-pay-later) solution, built around a vision to become one of the leading halal fintech companies in the Muslim world. With 30,000 active users, IMAN Invest manages over $1.2 million users from more than 1,000+ retail investors across 60 countries. Halal BNPL is also connected to more than 100 merchants offering goods and services across consumer electronics, household appliances, sports, healthcare, and education. 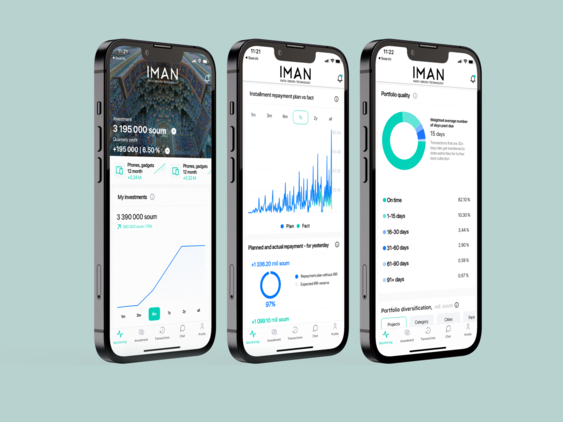 IMAN is unique in the BNPL domain in the sense that it not only provides halal BNPL but also builds halal funding sources for such service: investors invest and shoppers buy goods/services from IMAN via merchants through a “cost-plus” financing structure (“Murabaha”). At the same time, there is a separate Islamic purchase/sale agreement with the merchant. Also, IMAN does not generate revenue from late fees or other charges that are conditional upon users missing payments. With this model, the team hopes to encourage responsible spending, which will further align spending with customers’ religious beliefs.

Investors who invest through IMAN get exposure to frontier markets and can take advantage of their high yields; generate halal profits in line with their values; make impact-oriented investments, such as funding a person’s education or medical treatments, and diversify their investment portfolios. To scale the investment platform throughout the world, IMAN is looking to build a DeFi (decentralized finance) protocol that will connect investors seeking sustainable halal yield with consumers in frontier markets where there is a gap in access to capital.

The $1 million round, announced on February 22, was completed by a group of eight VC and institutional investment funds with the participation of Battery Road Digital Holdings, Tesla Capital, UZCARD Ventures, MyAsiaVC, Le Mercier’s Capital, Block0, Vector Crypto Capital, and IT-Park Investments. In addition, a number of angel investors from the UAE, United States, Uzbekistan, Kazakhstan, and Singapore have supported the company’s plans to make halal BNPL and investments everyday accessibility, first in Uzbekistan and then globally.

Ed Simnett, Battery Road commented, “IMAN is BRDH’s first investment in Central Asia. We could not be more excited about the team, the business segment, and the market. A number of our success stories were superapp businesses. The combination of a rapidly growing economy and consumers’ increased comfort with technology creates an exciting opportunity for the IMAN team to build a halal superapp.”

Olzhas Zhiyenkulov, founder of Tesla Capital (Singapore) added, “IMAN represents the best of Frontier Technopreneurship: building an inclusive financial ecosystem that empowers MSMEs and consumers to control cashflow, access funding and transact in a socially acceptable and responsible way. Coming from a Muslim family, but also being a professional in “traditional” finance, I know how important it is to have access to the same financial innovation that the broader financial world enjoys while being in harmony with one’s system of beliefs and morals. That is the true spirit of financial inclusion.”

The MENA region still has a very low penetration of credit cards as people are skeptical of traditional financial institutions taking advantage of them with interest and hidden fees. To address this gap in the market, a few BNPL players, such as Tabby and Tamara, have emerged over the last couple of years, however, the industry is still at a very early stage of development growing at ~90% per year.

The UAE BNPL Business and Investment Opportunities Report 2022 stated the BNPL payments are expected to reach $1822.7 million this year. This is attributed to the shift in consumer behaviour largely focusing on online shopping platforms and dependency on digital payments. BNPL payments have hence become one of the fastest-growing payments methods in the country.

Rustam Rahmatov, Founder & CEO at IMAN: “First and foremost, this investment will help us scale our technology in order to integrate seamlessly with retail partners across the different regions both online and offline to provide finance in seconds. Secondly, we’ll be able to roll out partnerships with merchants across all sectors more aggressively including beauty & fashion, FMCG, and services. And lastly, this investment empowers us to start exploring opportunities in other Muslim majority markets, including GCC, in early 2023. We are extremely excited to partner with our investors who have made investments in similar businesses in other geographies and bring with them a wealth of knowledge and expertise”.

The company is one of the few BNPL players that relies solely on halal sources of funding and allows people across the world to fund consumers’ purchases directly at the point of sale. To further accentuate its commitment to Islamic Finance principles, IMAN received compliance certification (“fatwa”) from the esteemed Islamic professor Dr Ziyaad Muhammad of INCEIF (Malaysia) and the Muslim Board of Uzbekistan.

IMAN will be present at the Step Conference in Dubai on February 23-24 and is expected to raise another $1 million in its Pre-Series A funding.